Put an end to Morgoth's reign of terror 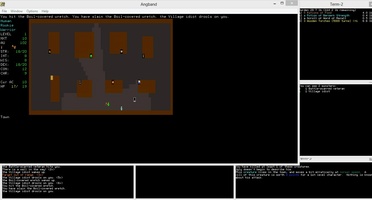 Advertisement
Angband is a free open source 'roguelike' game in which players must enter different dungeons to find and finish off the feared Morgoth, lord of eternal darkness.

The game is based on the works of J.R.R. Tolkien and was created as a continuation to Moria, one of the 'roguelike' genres forefathers. Its initial goal was to expand the story, add more enemies and objects, and ultimately create a more solid experience.

In Angband, players will have dozens of different possibilities when creating their character, a process that can carry on for longer than usual due to its complexity. Once you have the character, you'll encounter most of the usual standards of the genre.

An element that noticeably differentiates Angband from most of the genres’ alternatives is that it allows you to, with a simple click, change the game's graphics. In fact, you will have several different 'tilesets' at your disposal to use the one that best suits your tastes.

Angband is one of the best 'roguelike' games out there. It’s not only a very solid and attractive experience, but is also more accessible than most thanks to its different interface features and graphics.
Reviewed by Andrés López Translated by Stanislav Sousek
Advertisement

Why is this app published on Uptodown?
(More information)

There are opinions about Angband yet. Be the first! Comment

Tales of Maj'Eyal
Hundreds of deadly mazes await
Nethack
Can you get Yendor's amulet and escape alive?
Red Rogue
Descend into the depths of the dungeon
DoomRL
The Doom role game is real hell
DiabloRL
And you thought Diablo was difficult? Try this!
CastlevaniaRL
Castlevania goes roguelike
Unreal World
Role-playing and survival in Medieval Finland
Dungeon Crawl Stone Soup
A descent into the depths in search of the Orb of Zot

Playnite
Merge your game libraries and platforms into a single tool
Retro Arch
One emulator to emulate them all
Play!
The easiest-to-use PlayStation 2 emulator
Xemu
An excellent Xbox emulator for Windows
FCEUX
One of the most comprehensive NES emulators you can find
Mednaffe
A simple and effective frontend for Mednafen
Duckstation
Cemu - Wii U Emulator
A Wii U emulator that works like a dream